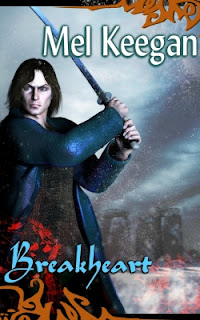 The prizes are honor and freedom. The battlefield, a place they call Breakheart.
Winter lies heavily on the uplands between two great trading cities, where the only shelter for miles is the settlement of Brennan's Rath, more commonly known as Breakheart. On an errand, a young bondsman, Fendel, rescues an enigmatic stranger by the name of Richard Leon, and uncovers a life-and-death mystery.
Richard is an outcast member of the prestigious Scryer's Guild. Through his own foolishness he was ostracized even by his friends, and the only way back to honor is through the hunt, and the sword.
For Fendel, Richard's arrival in Breakheart is the turning point in a life that's become a nightmare. For Richard, Brennan's Rath could be his doom. His enemies are one step behind and, live or die, his story ends here and now.
[Note: this 'generation’ of BREAKHEART is 1,500 words longer than the text previously published in Alyson Books' "Swords of the Rainbow," , 1999.] 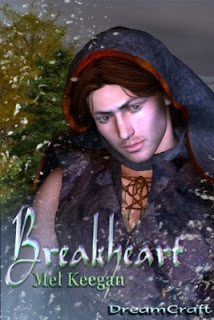 This mobile friendly version of MEL KEEGAN ONLINE created and posted by webmaster JADE.
Posted by Jade at 10:25 PM