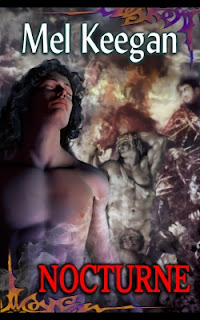 You are invited into the glittering midnight world of the ancient. The immortal. The vampyre.

Intrigue, murder and madness welcome Captain Vincent Bantry home to the of 1892. In the he fought opium smugglers and Manchu warlords, but no experience prepared him for meeting young Irish occultist Michael Flynn.
The future unfolds in the Tarot: danger, pain, struggle -- but the end of their story cannot be foretold. And what of the past? The mystery of Flynn draws Bantry into an alien, irresistible world. Instinctively, he knows Michael is different, not merely beautiful, brilliant, exotic, but unlike anyone he ever knew … and love is painful.
Soon Vince is webbed in tangles of deceit, cruelty and danger, one jump ahead of the law. He and Flynn are hunted for crimes of which they are innocent, sheltered by a Parisian vampyre house which draws their enemy like bait, with appalling consequences. And all the while Vincent is seduced by the grandeur of a midnight realm he has glimpsed and greatly desires.

Keegan paints this vampyre world on a panoramic canvas spanning centuries -- possibly the richest, strangest tale from Mel, as detailed as The Deceivers, as vastly plotted as Hellgate, with numerous twists and a delicious sting in its tail.


MEL KEEGAN COMMENTS ON NOCTURNE
Here is a story that's been 'close to my heart' since I did the first draft, way back in the mid-1980s. It's been through four drafts since I had the idea for a 'gay vampires' opus, and the last version is most definitely the best. For two years or so, I had believed Millivres would be doing the book, but nothing has developed in that court, so ... long enough has elapsed for me to 'pull' the manuscript from submission. This one is a book 'with a history,' in more ways than one. What follows is a potted version of that history which spans almost eighteen years! I wrote the first draft in 1986, and at the time I did it as a straight (het, non-gay, whatever) book, for good reasons: I was trying to establish a career as a writer and I thought I had a helluva plot here! It *is* a helluva plot, but the fact is, it was wasted utterly as a straight book. It didn't, and couldn't, come to life until it was given the Mel Keegan treatment. I'll leave it to you to figure out what the non-gay version was like and how it was plotted, but I'll give you these clues: all the characters in the '86 draft are still in the current version ... they've just been rearranged in the FOUR subsequent drafts!
A second version of this story was done in 1991, and it was gay; it was extensively "beta read" at the time, by boat-loads of people, and well received ... but I was never happy with it, because parts of it were terminally underdeveloped, and it was already 160,000 words, while GMP (with whom I was on-contract for both EQUINOX and FORTUNES OF WAR at the time) couldn't even handle that narrative, let alone the 225,000 words it was trying to be. So I never went any further with the gay-beta version, well-received though it may have been
Fast-forward through ten years, and suddenly I'm with Millivres! I approached my then-editor with the book, and he didn't have a problem with the 205,000 word third draft, which had, along the way, undergone a title change. It was now called NOCTURNE, which is the definition given to a piece of music 'sonically depicting' the night. I showed the third draft to Millivres in August 2002, and never received any firm answer regarding publication or scheduling. At one point the editor faxed me that he'd reserved a berth for me in the mid-2003 list, but I heard nothing back, and that date came and went. I faxed in January '03, offering Millivres the book through Christmas '03. *That* date came and went! And there was the cut-off line for my pride, if not my patience. I faxed again, informing Millivres NOCTURNE was withdrawn, and would be issued via my other gay-fiction outlet.
At the time of this writing, it's January 2004, and Millivres's continuing silence in response to the news regarding NOCTURNE is being read, by all of us here, as consent to go ahead. And here we are!
The version of NOCTURNE that is going into print on January 27 is 'tightened' from 205k to around 200k, to bring it into line with the current Keegan style, and I'm thrilled with the cover. 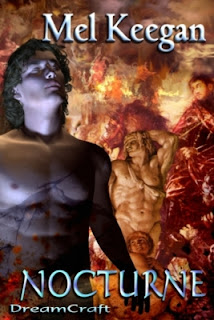 This mobile friendly version of MEL KEEGAN ONLINE created and posted by webmaster JADE.
Posted by Jade at 10:03 PM