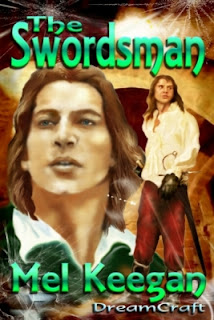 Mystery, magic, action and gay romance in a haunting fantasy world ...
Jack Leigh is a soldier of fortune, far from home, a brilliant "sword for hire." But in a dangerous Riverlands dukedom he gets more than he bargained for.
Treachery and vile magic form powerful undercurrents in Rhondia. On the canals and in the the forest's dark heart lurk unimaginable threats. The bo'zhe, the Lappai, barbarians from Saihabara and the unknowable forces of Nimmenwald Deep.
At the crux of the vortex is Michael Sebastian d'Astaghir. Haughty, moody, tortured by the goblins of memory, Seb is in terrible jeopardy when old companion Luc Redmayne witnesses a streetfight. The "hired sword" comes to the citadel as Seb's bodyguard, and with the fresh eyes of a stranger, the shrewdness of a warrior and the help of a young gypsy shaman, Jack uncovers a hotbed of treasonous magic.
When he, Seb, Luc and Janos Zaparasti unlock the secret of the Basilisk ring, they unleash the very forces they have feared, in this wholly original gay fantasy from long-time favorite Mel Keegan.

Mel Keegan Comments on The Swordsman
As a long-time fantasy reader, I reach this point in my association with DreamCraft with great joy. Finally! The day has arrived when one of my fantasy worlds is going into print. It was always something of a sore spot, that GMP (which was in its day the leading gay publisher in Europe, with, at one point, over 250 books on its list and 26 new titles per year being issued) had no space for fantasy fiction. Fantasy has been popular for decades, and for as long as I've been writing gay novels, I've wanted to explore gay dimensions in fantasy realms.
I'm indebted to DreamCraft for giving me this opportunity ... I'm also even more indebted to the readers who have found us and stayed with us during the first eighteen months of this creative partnership. Stay with us a while longer, guys: there are some surprises around the corner.

RESEARCH TALES:
DESIGNING A FATASY WORLD, or ... What, research for a fantasy novel?
Absolutely. One of the most difficult things about fantasy is the "mortar" between the bricks: that is, the stuff sticking the whole thing together! The adhesive is (if this doesn't sound "too Irish" for you) a faux reality that must be rock-solid, or the fantasy will soon fall apart.
For THE SWORDSMAN, HARBINDANE, MYTHGAARD and other fantasy fiction you'll be seeing in the years to come, I was able to do one body of research and apply it to several novels. And fortunately, most of the research was done around ten years ago, when the original versions of these novels were produced. Not a one was published at the time. GMP were not interested in fantasy at all; Alyson had done WORLDS APART and the anthology, SWORDS OF THE RAINBOW, without much success ... I saw a comment (might have been on Amazon.com; it was certainly on the Web, though I confess, I don't recall exactly where!) that Alyson didn't promote SWORDS OF THE RAINBOW much, if at all. I had a story in that one, and if the book had gone well, I was going to offer Alyson a fantasy novel. However, the anthology passed by without critical interest and apparantly without generating outstanding sales: in retrospect, unsurprising if there was no promotion. At the time, I was left wondering if David Fernbach at GMP might not be right, and though fantasy was popular out yonder in the general marketplace, gay fantasy fiction was a "non-starter." So I never even offered Alyson a novel. The late 1990s were way too busy for me on a personal level to even think about chasing down a new publisher (it's not as easy as many readers think!) and of course I entered discussions with DreamCraft in 2001.
But I digress! Research...
Put yourself back to a time before electricity, before steam. Think through the mechanism of how a city has to work. Lines of communication, routes of trade. Where is agriculture taking place, and how? What's the climate like in this particular region? Is the climate changing? What pressure does the climate, and change of climate, force onto people? And if the climate is changing locally ... say, getting colder ... how does this affect people living five hundred miles closer to the pole? And vice versa?
In fact, the world's climate is constantly changing; we know this now, for a fact, and many of the patterns of human history are driven by it. Before the concreting-in of national borders, history is full of migrations. People have found themselves in the same "flush-crash" cycles as voles and owls, foxes and rabbits. So where you have trackless wastes (as my novel does), and where you have a people who can chart their history over five centuries or more, you could put money on this: bodies of people will be on the move, and it's going to come to armed conflict sooner or later, as the "haves" fight to hang onto their land, food and water.
So I looked at prehistoric agriculture, hunter-gatherer communities, and got some questions asked. Here was a good one: How far can a horse run in a day, and be asked to do it, every day, week in, week out? I had other questions about the temperatures needed to forge decent quality steel (what can primtives in the field do, on the run?) ... and how much land area does it take to feed one family? How many families make a workable gene-pool -- which is to say, a viable city that'll actually grow over five hundred years, not stagnate and perish.
If you apply this kind of thinking and do a bit of research, your worlds start to build themselves, like a kind of "SIM Middle Earth." You also catch a glimpse of some apparent oddities in LORD OF THE RINGS ... and I *do* know, JRR Tolkein was a linguist, not a "hard" scientist; he built his incredible fantasy world as a "lingual progression," and he did it in the last decades pre-dating our understanding of climatic shift, so (before anyone assaults me for this!), I'm *not* being critical here, just curious! To the best of my knowledge, the climate hasn't changed over 3500 years in Middle Earth. Lands were devastated by war, but the land itself seems to be eternal ... which in fact it wouldn't be, if Middle Earth is a period in the history of our own world, perhaps 5000 years before the hypothetical fall of Atlantis (the time of Robert Howard's Hyborean Age). The other thing that strikes me as a bit of an odditiy (and I'm sure Tolkein had his reasons) in LOTR is, over 3500 years there's been no advance in technology. Humans and elves fought Sauron in the first War of the Ring, and they're fighting the Dark Lord again with the same weapons, thirty-five centuries later, rather than Mount Doom going down under a brace of MERV Warheads as soon as the shadow began to extend out of Mordor once more. Again, I'm not being critical, merely observant. As I've said, I'm sure Tolkein had his reasons; they may well be buried somewhere in the depths of The Silmarillion. I've read a lot of it, but I have to confess, not all: I'm just a casual reader, not a Tolkein scholar. As I said, it makes me curious.
So, for the opus of fantasies I was working on a decade ago and which are about to go into print at last, I ran through these thinking processes and built my worlds with a lot of attention to the conclusions. I needed a lot of information to feed into the grinder to get my conclusions, and hence ... research, even (or especially) for a fantasy!


This mobile friendly version of MEL KEEGAN ONLINE created and posted by webmaster JADE.
Posted by Jade at 11:10 PM