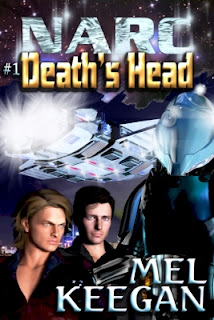 Four and a half centuries from now, a lethal designer drug known as Angel has become an epidemic disease, and a new breed of hero has evolved to liberate a generation doomed to be lost to its ravages.
Jarrat and Stone are captains in the paramilitary NARC -- Narcotics and Riot Control -- assigned to combat the Death's Head drug syndicate in control of the vast spaceport city of Chell.
Under the NARC code of non-involvement, each of the two men hides his deeper desire for the other. But when Stone is captured on the urban battlefield and forced into Angel addiction, Jarrat's feelings for him are his only chance for survival. The price is that their minds will remain permanently linked in an empathic bonding...
For NARC, the opportunity offered by this unique situation is too golden to pass up. To the team designing cutting-edge surveillance systems, the connection between Jarrat and Stone is a gift from jealous gods. But for the men themselves, the situation is an explosive cocktail of desire and dread, love and anger -- the struggle to survive, and a harsh question which both must answer. Will they let the department turn them into labrats in order to preserve their rank, their position, and keep on doing the job which, for each, is a burning vocation?
THE UNABRIDGED EDITION was first published in March 2004 by DreamCraft. It's 25,000+ words longer than the original GMP issue; its new jacket was designed in consultation with the author.
(Want to know the backstory of the COMPLETE & UNABRIDGED issue of this book? Why it was cut ... how it was cut ... how it's been restored and reissued? You'll find it on the website -- not mobile friendly, but well worth a visit when you can view full wepbages.)


(Caveat: material in this free sample is not suitable for juniors. Consider yourself warned!)

Mel Keegan comments on DEATH'S HEAD
Of the fifty-odd novels and stories I've written, the "NARC universe" pieces are in my top-five. I love this universe, and I think the potential of the NARC concept is still 60% untapped, even after APHELION. Jarrat and Stone are "icon" characters set against a background where there's no confusion of right and wrong: it's as clear as black and white, good and evil. No need to rationalize the conflict which must be fought to rescue a generation of humanity (and the future of the colonies). On the most basic level, too, I get a big kick out of the technology. In a NARC book I get to dogfight in jetplanes, shoot it out between characters in space armor and high- tech machines ... and at the exact same time, explore the empathic bond between my heroes. Notice, it's not telepathic, but empathic, which changes the playing field utterly.
The jacket blurb states that these stories take place in the 23rd Century ... dead wrong! Many times, I tried to convince GMP of the 24th Century dating, but to no avail ... no one was listening before the jackets were printed!
The interesting thing is that the explosive conclusion to this book is due in large part to the input of the commissioning editor, the late Richard Dipple (who was the hub around which GMP revolved, and who is still missed). My original ending for the novel was a twist of irony: Jarrat chased down the chief villain who had taken Stoney's armour and Jarrat's own weapon in various previous altercations. Jarrat found himself looking down the business end of his own Colt AR-60. He knew exactly what that weapon could do to him ... and for the first time in the service lifetime of this particular firearm it jammed, giving Jarrat the advantage. I was happy with this ending and sent the novel in. Richard was happy with everything except the ending, which he said (and he was right) it didn't "go off" with big enough bang!!, and it should be redone. So I took the whole thing to pieces, and the version which was printed back in late '91 is the result.
Posted by Jade at 10:45 PM