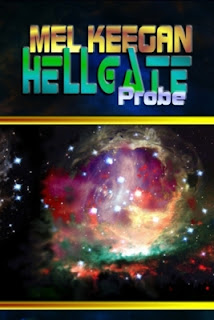 Recovering from the events of Cry Liberty, Neil Travers and Curtis Marin are pleased to be mere spectators for a time ... but the scenes at which they are on the sidelines are beyond their imagination.
The super-carrier Shanghai has driven into the Deep Sky, poised for the invasion of Ulrand ... on Kjorin, Dario Sherratt believes he has discovered the key to the Zunshu stasis chamber ... in the storms of the Rabelais Drift, the Wastrel plays pool with cosmic forces ... in Marak citybottom, Vaurien and Jazinsky pit themselves against old enemies.
And Michael Vidal prepares to fly the mission of his life, into the dark heart of Hellgate. A place the Resalq call El'arne ... 'The stormy side of the sky.' Into this void, the explorer Ernst Rabelais vanished many years ago; and out of it, the Zunshu strike at the new human worlds as they once destroyed the Resalq...
For Travers and Marin, these are strange, bittersweet days, on one hand filled with self-discovery, on the other, shadowed by fear. They long for the so-called 'Colonial Wars' to be over, yet find themselves at the very crux of the danger, politics and intrigue as General Harrison Shapiro makes his gambit.
The stakes are the liberty and the survival of the Deep Sky.
Gay-themed SF at its most astonishing and rewarding. If you loved the NARC novels, and like serious SF with a strong gay twist, don't miss this series!

Mel Keegan comments on PROBE
I'm proud of this book (in fact, I'm proud of the whole series, but I think PROBE is the best one so far). The folks at DreamCraft who proofread it prior to printing go one better than that: I'm being told it's the best *book* I've written. Well, that could depend on what you want to get out of a book: if gay SF is your favorite fiction, you could be agreeing with the proofreaders! For those aficionados of the great historical saga -- hang on, stay tuned, come back next month, because as soon as I finished my final check of the PROBE galley, I began the final work on the DANGEROUS MOONLIGHT galley! But I'm supposed to be commenting on PROBE here, so don't let me wander (too far) off topic.
Speaking as the writer, the best thing about getting to #4 of a series is, it's like coming home. You know all the characters, they welcome you back. In imagination, I can walk into Shapiro's office, or walk into the ops room aboard the Wastrel, and I'm there. I can actually hear these characters talking to me: they have clear and distinct voices, and each one has a speech pattern of his or her own. There are characters I love (duh), and those I've come to enjoy writing because I dislike them so much: Senator Rutherford, Sergei van Donne ...! A long time ago, a reader said to me she thought it was odd (perhaps a mistake??) that I'd gone to all that time and trouble to develop a villain -- Colonel Wayne Mulholland -- only to promptly kill him off. The fact is, there were better villains to come: Mulholland was vicious, but he was limited. He had no plenipotentiary powers, and since he worked under the auspices of the DeepSky Fleet, he had no connections among the smugglers and Freespacers. As we cruise into Book 5, whole vistas of opportunity are opening up. I can hardly wait to get into the next 'arc' of the story. It's worked up a full head of steam, and has a life of its own.
There wasn't much in the way of world-building this time around, but I had the opportunity to go back to El Khouri, look at 'ground zero,' and examine what the heck happened there ... and what the logical outcome of it would be. One really constructive comment was made to me, literally as we were finalizing the galley: I should go back into Chapter Two of PROBE and actually decribe, explain, what happened in the Event. It was an implosion ... but here we are with half a hemisphere wrecked, and a nuclear winter in progress. Isn't that what happens when there's been an EX-plosion? Yep. And it's also going to happen when you have a #&%!ing-great-big IM-plosion. But perhaps some readers are left wondering why, so let me explain ... turn to Chapter Two of PROBE, the El Khouri segment.
There's so much in PROBE, looking at it now, "I can't believe I did that." I actually plotted the whole thing *and* CRY LIBERTY, as the same story. My brain must have gone out for pizza and forgotten to come home. By the time I was done with PROBE, it was virtually the same length as CRY LIBERTY, and if we'd tried to sandwich both books under one cover, you'd have had a paperback of about 530pp. (The largest/thickest volume DreamCraft can produce is about 425pp). I'd like to say I've learned my lesson, but I just took a look at the plot notes for the next HELLGATE segment. And I do believe I need to go in there and perform some minor surgery before I start writing.
For now, let me close here ... but I will reiterate the comment I made a few weeks ago: I'm close to speechless (and that's saying a lot fot me!). This one is a candidate for the best cover we've done yet -- it has an astonishing dynamism -- and the 'face design' process has resulted in a Mick Vidal who is so close to the vision I had in mind, it's eerie. Full marks to Jade for the face work and the background painting, and to Dave, who engineered the 'drift ship' in 3D!


This mobile friendly version of MEL KEEGAN ONLINE created and posted by webmaster JADE.
Posted by Jade at 7:25 PM