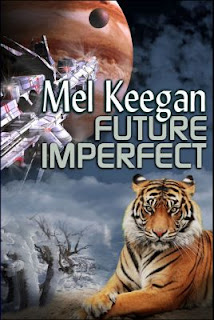 Under one cover for the first time, three stories of a 'broken Earth' ... with a difference. Humans -- survivors, pioneers, environmental scientists -- are working to repair the damage, save the planet, rebuild our hope for a bright future.

WINDRAGE
An asteroid impact has caused nuclear winter, but a few years later the new frontier's colonists are rebuilding. The town of Windrage is a safe, comfortable settlement with a fine officer of the law. But roadie trash, the Stone Angels, are headed to town with an ice storm right behind them: Jon Cameron knows he stands no chance, single handed. When infamous gunfighter Scott Warne arrives with news of the incoming gang, Cam glimpses the one way out of this dilemma ... and attraction crackles between the two. Set in real locations in South Australia.

CALLISTO SWITCH
Lee Vidar is a "switch pilot" on the Callisto-Europa run. The job is usually easy ... but on this trip nothing goes according to plan. Rumor is sizzling, and Lee's sometime lover, Dujon, is involved in the intrigue up to his eyeballs. The overpopulated Earth has one last chance, a new world known as Hope ... and humanity is in big trouble. Set in the futuristic industrial cities of the Jupiter system.

TIGER, TIGER
2073, and tigers are extinct in the wild. The species flourishes, genetically redesigned as pocket-size, exotic pets, but in one place on Earth the big cats live on, in the wild. Billionaire Cass Vandermeer owns a primordial stretch of Tasmania where a handful of tigers run free. But gene smugglers are in this remote national park, and rangers -- life partners -- Sonny Moran and Alec Fitch are in harm's way, fighting for their own survival as well as that of the tigers they guard. Set in genuine locations in remote Tasmania.


FREE BONUS IN THE EBOOK VERSION: Aquamarine, included here in entirety! (Note, Aquamarine does not appear in the paperbackback version.)


This mobile friendly version of MEL KEEGAN ONLINE created and posted by webmaster JADE.
Posted by Jade at 11:19 PM