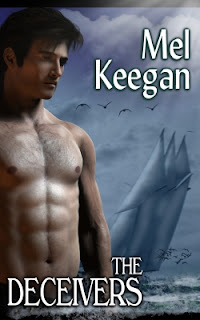 1862, on the east coast of : the railway is the death knell of the coastal shipping trade, and many small lines like Eastcoast Packet won't survive. Sail and steam are technologies in collision -- the thousand-year tradition of the tall ships is almost an end.
Jim Hale is about to inherit Eastcoast and the schooner Spindrift, if he and Captain Bill Ryan can first survive the explosive violence of the North Sea and the vicious schemes of shipwrecker Nathan Kerr, who has a score to settle with Jim -- and with Ryan, for whom the situation has become intimately personal.
Bill and Jim are caught in the jaws of change. Survival depends on bravery, brawn and the willingness to take terrible risks. For men who have the courage to be lovers in this time and place ... the struggle is dire, the rewards astonishing.
Mel Keegan returns to sea in the days of tall ships and high adventure with this historical thriller, rich with action and gay romance. Meticulously researched, fabulously detailed, The Deceivers will be treasured by readers who loved Fortunes of War and Home From the Sea. 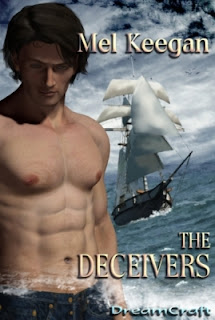 This mobile friendly version of MEL KEEGAN ONLINE created and posted by webmaster JADE.
Posted by Jade at 12:04 AM