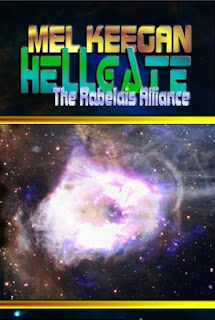 In a place where space and time collide, the future of mankind will be decided.

In a region of space so terrible it has long been known as Hellgate, Earth's DeepSky Fleet plays cat-and-mouse with the starship wreckers, privateers who, alone, can navigate the wilds of the Rabelais Drift.

The supercarriers are the greatest ships in space, but under the iron heel of a corrupt officer corps, answerable to no authority, these leviathans are hellships. Conscripts are used, discarded, and enforced conscription is a way of life. Everyone, will serve the DeepSky Fleet.

Decades ago the Confederacy declared its 'strong Fleet policy,' first taxing the colonies to build the ships, then conscripting their youth to crew them. Earth's military scientists had learned of a shadowy, faceless enemy so powerful, humankind's closest companion in this region was obliterated.

The same fate awaits mankind, with only Fleet standing against a dimly perceived foe known simply as Zunshu. But as the day approaches for Fleet to fight, its infrastructure is rotting. The supercarriers can barely keep pace with the wreckers -- mere human foes. Their abused crews have no concept of the mission they were recruited and trained to fight.

Into this arena of misery step two unlikely players. Neil Travers and Curtis Marin are from worlds so different, only their conscripted military service unites them -- that, and a desire to survive, see justice done and uncover truths ignored by Earth's leaders. Travers is still in the service, and his connections to the privateers would be more than enough to execute him. His current assignment is the Intrepid, his field of conflict, the Rabelais Drift.

In a time of rampant injustice, often justice must be pursued on a personal level. Marin comes to the Drift to execute a sanction contracted by a prominent citizen whose son was murdered in a travesty of justice. He might stay alive long enough to complete his mission, if the Intrepid can survive the corruption of her officer corps, the endless battle with privateers, and the insuperable forces of nature that churn across the ripped face of the wastes known as Hellgate.

The deep-space action of the first volume is set aboard the super-carrier Intrepid. Under the command of an officer corps more interested in increasing their own personal wealth, the carrier has become another of Fleet's hell-ships. I this arena Curtis Marin and Neil Travers meet ... and the fight for survival of the entire crew takes place scant days later.
In this book, we meet Marin's uncommon friends, Mark Sherratt, Mark's son, Dario, and Dario's partner, Tor Sereccio. Mark Sherratt is the power behind the shadowy, mysterious Dendra Shemiji, an organization popularly characterized as a society of assassins; but Dendra Shemiji is much more than this. Dario Sherratt's vocation is "cryptocybernetics," and his work takes him to the crux of the real threat in the Deep Sky: the Zunshu.
And Neil Travers's friends will play a major role in the fortunes of the survivors of the Intrepid and Sherratt's group. Captain Richard Vaurien commands a crew of privateers, physically outside the law of the Confederacy, flying out of "Freespace" with two goals in mind. Vaurien's people are dedicated to freeing the colonial DeepSky from the tyranny of the homeworlds ... and also to the conquest of Hellgate, Rabelais Space, out of which come the Zunshu.

This mobile friendly version of MEL KEEGAN ONLINE created and posted by webmaster JADE.
Posted by Jade at 7:04 PM