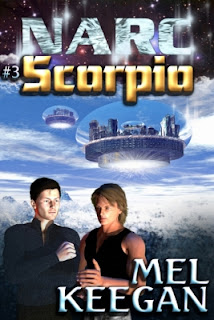 The third NARC book, direct sequel to DEATH'S HEAD.
Jarrat and Stone are back yet again, and if the Equinox assignment looked something of a challenge, this one is going to be a rollercoaster.
Aurora is a 200 year old colony opened up by sleeper ship and now booming. Its capital is the city of Thule ... so filled with Angel abuse that Tactical has accumulated vast bodies of evidence on "Scorpio". The syndicate has some very high connections, all the way back to Earth, but Tac Colonel Kris Janssen -- last generation of an original pioneer family -- has just cremated four officers who attempted to investigate the man at its head.
Young Marcus Brand has been preserved in cryogenic suspension since the very early days of the Angel war, 25 years before this story. Wealthy parents bought a colonial "sleeper" ship's cryotank to preserve him when he overdosed on Angel. Eighty years old now, Marc's father sees a documentary on Harry Del and is so impressed, he contacts Del directly, wanting him to perform his miracles for Marc. But the technique remains experimental and Harry refers the request to NARC.
As Harry applies for clearances to treat the Brand boy, Jarrat and Stone have just completed their official report on the Equinox Industries operation, and they are given their new assignment: the Angel syndicate known as Scorpio.
Harry receives clearance to work with Marc. The cryo tank must be shipped to the secure NARC labs on Darwin's World. It's shipped out on a Starfleet tender, and halfway between Aurora and Darwin's, it's tampered with. Marc almost does not survive in suspension long enough to reach Del's lab. The Athena is en route to Aurora, where she docks with the tender. Jarrat, Stone and CMO Kip Reardon realise the truth at once. Someone has tried to murder young Marc Brand ... to keep secret something he knew 25 years ago. Perhaps secrets that could spell the end for Scorpio?
The investigation takes Kevin Jarrat and Jerry Stone into the hearts of Aurora's super-cities, Thule and Inquanoc, but the seeds of rot lie as far away as Chryse, on Mars, in Earth's own backyard.

This mobile friendly version of MEL KEEGAN ONLINE created and posted by webmaster JADE.
Posted by Jade at 10:59 PM