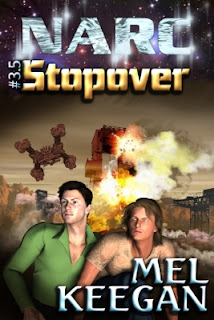 With the Scorpio syndicate closed down, Kevin Jarrat and Jerry Stone are on furlough, aboard the starclipper Pacifica and headed for an island resort in Rethan's tropics, but downtime becomes an explosive excursion into an industrial hell-zone.
When the clipper suffers engine trouble and must detour to the halfway station of Sheckley for repairs, the vacation dissolves into unexpected and unpredictable hazard.
Stone is fascinated to take the "ten cent tour" and experience the "gas can with lights" where Jarrat spent his youth. The tour turns deadly when they run into escapees from Scorpio who recognize Jarrat as his undercover persona of Max Tyler.
The NARC captains find themselves making a flight right into Hades. Cut off from NARC, the carrier, backup and weapons, they're on their own devices, surviving on their wits. Making it to that island resort starts to look like an impossible fantasy.
A Pocket-sized NARC page-turner, falling between SCORPIO and APHELION; readers whimsically designated it 'NARC #3.5!'
A Pocket-sized NARC page-turner, falling between SCORPIO and APHELION; we're designated it 'NARC #3.5!'

Oh, Magoo, you've done it again. Or, this is another fine mess you have gotten us into, Keegan. I know, I know, I keep doing this: I've been over-plotting novels since the original -- DEATH'S HEAD, which had to be so far amputated by GMP fifteen years ago, the product was hardly the book I'd set out to write. Well ... looks like I did it again, guys.

I wound up with an APHELION which was around 40,000 words too long to fit into anything like a normal book. It would have been way longer than DANGEROUS MOONLIGHT and NOCTURNE, and this, at the same moment as Australia Post airmail rates just hiked again. Not good news. It was time to back off and take a look at APHELION before I gave DreamCraft (and readers) a couple of heart attacks. And what do you know? There was a 38,000 word 'pilot segment' sitting right there, ready to be whacked off at the roots and redeveloped/expanded to stand on its own. (It wound up at just over 44,000 words, which is the absolutely perfect length for one of our SlimBooks.)

The fact is, STOPOVER was only marginally part of the plot of APHELION. It has more (and a LOT more) to do with DEATH'S HEAD. You'll discover why when you read the book ... I don't want to say too much at this time, because it's plot spoilers to the eyeballs. But I can give you a couple of hints. Ever wondered what went on in the Chell underground when Death's Head was destroyed, leaving behind a vacuum? Ever wondered where Hal Mavvik came from? Or what might happen when a couple of NARC guys try to take a simple vacation? Did you ever want to take a close up look at the place where Jarrat grew up -- maybe find out a little bit about what makes him tick? He's been called 'mean, moody and magnificent,' (I love that description; it's from a reader review which appears on-site here, and many thanks to 'Ranger' for coining it).

So I lifted out the pilot segment, cut a little, added a lot, and called it STOPOVER. The title refers, actually, to the brief time Jarrat and Stone spend on Sheckley ... because it's there where 'the whole vacation plan goes south' for them. This story begins about two or three days after the end of SCORPIO. At one point, Stone makes reference to the fact that Michiko is on the carrier, Harry's working to get Marcus's brain back into functioning order, and after their downtime our heroes are headed back to Darwin's for debriefing and another assignment.

The really great thing about doing STOPOVER extra to APHELION is that I was able to take it in slightly different directions, and at a slightly different pace, that you'd expect in one of the main novels. I could afford to 'interrupt the action' here and let them explore Sheckley ... I didn't have to worry about such peripheral material slowing down the main plot. (In a worst case scenario, someone somewhere is going to say, 'the novel is padded out, which makes it a slow read.' Barf. Well ... they'd be making a point, because I already 'fessed up and admitted that STOPOVER doesn't actually have a goddamn' thing to do with the plot of APHELION. But one reader's 'padding' is another reader's 'character development' --

And I'll be honest again: I have been longing to find somewhere, some way, to get in there and do some character development. In 180,000 words of SCORPIO, I couldn't find a place to jam any character development in edge-wise. This was my opportunity, which also means it's a rare treat for those readers who might have been waiting and hoping to have the characters just STOP for the occasional ten pages, sit down and talk, or examine their motivations, feelings, whatever.

I guess I've forged a rep for myself as a writer of thrillers, and that's terrific; but there is a downside. It's very hard to develop complex characters inside a plot like SCORPIO or EQUINOX, and there's times when I actually find myself longing to do a bit of old fashioned character development.

The other thing I often long to do is a bit of comedy. There's no place for humor in the regular NARC book. The issues at stake are too important and the stress is on for all concerned. No one has time to sleep a great deal, much less find time for humor. But with STOPOVER I was able to slow down the pace and let humor happen. I enjoyed the process of writing this a great deal ... in fact, I'd like to do it again soon.

This mobile friendly version of MEL KEEGAN ONLINE created and posted by webmaster JADE.
Posted by Jade at 11:05 PM